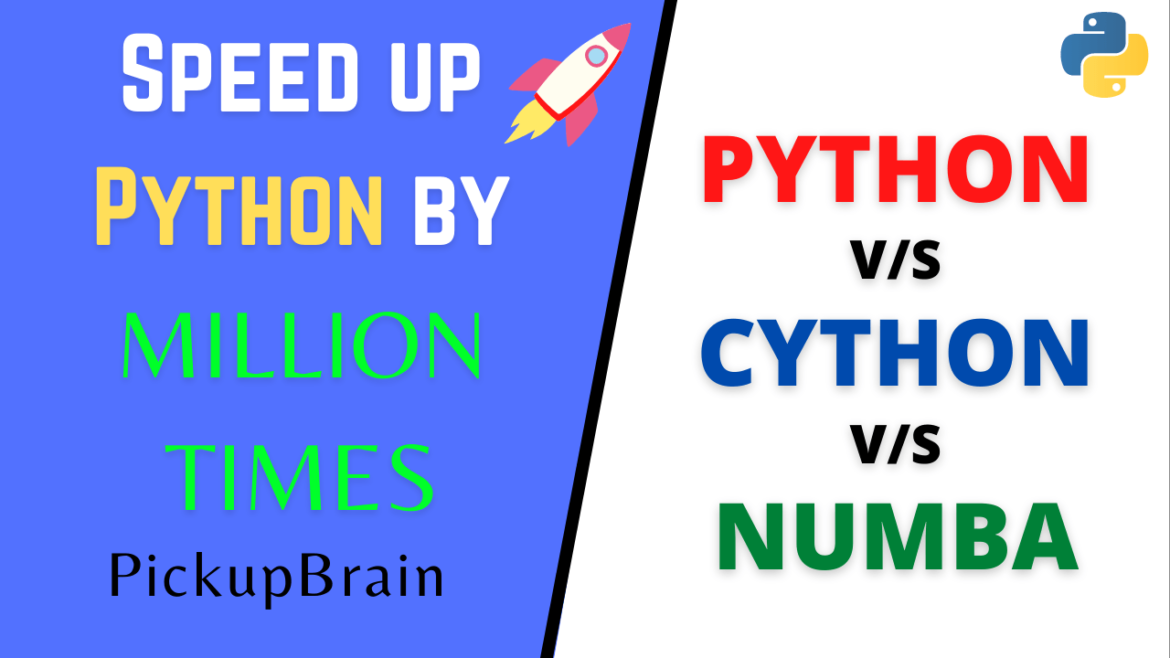 No matter how much we love Python, we all agree that Python is Slow!!! Why? Higher level language features like dynamically typing and Python interpreter which makes Python user friendly also make it sluggish. Other reasons for being slow includes Global Interpreter Lock popularly known as GIL. All these makes Python much slower compared to compiled lower level language like C/C++ and Fortran.

Features like list comprehension speeds up Python code but finds limited use. Moreover, speed up gain is limited as it doesn’t address the above fundamental problem. But there are ways by which these bottle neck can be addressed and you can speed up Python code up to 1 Million times and practically achieve speed close to C/C++.

Numba and Cython to speed up Python

Dynamically typing (i.e. checking variable type at run time) and Interpreter of Python incurs a big penalty to its speed. Numba and Cython both, attack this problem to achieve huge speed up.

It provides a way to add static type declaration to Python program and then compile it to faster C/C++ extension (similar to NumPy) which can be imported in any Python program like any other Python modules. In short, Cython makes writing C extension for Python language as easy as Python itself. For more details on installation and tutorial on Cython visit here.

Numba is an open-source Just In Time (JIT) compiler. It speeds up Python and NumPy functions by translating to optimized machine code using industry-standard LLVM compiler library. The best part of Numba is that it neither needs separate compilation step nor needs major code modification.

In most case, Python function can be optimized by simply adding one-liner decorator above it. Moreover, it offers range of speed up option like vectorization and parallelizing Python code for CPU and CUDA supported GPU in one-liner decorator. For more details on installation and tutorial, visit 5 minute Numba guide.

Benchmarking of Python speed up with Cython and Numba

To demonstrate, speed up of Python code with Cython and Numba, consider the (trivial) function that calculates sum of series.

Compiling and static typing of Numba:

If you are seeing Numba code for the first time, you may be wondering “How one liner decorator solves static typing and compilation?”

When Numba code is called for the first time, Numba compiles code function for the given argument type into faster machine code. Hence first call to Numba function may take few additional seconds as it includes compilation time. However, once the compilation has taken place Numba caches the machine code version of your function for the particular types of arguments presented. When called again the with same argument types, Numba reuse the optimized cached version. All this optimization is achieved with just one word decorator “@njit”

Lot of benchmarking result are available on internet. However, many result includes, one time compilation time of Numba code into benchmark. This is one of the common mistake done while profiling Numba code which results in huge underestimation of Numba performance.

Python vs Cython vs Numba

Numba is relatively faster than Cython in all cases except number of elements less than 1000, where Cython is marginally faster.

Numba and Cython can significantly speed up Python code. Static typing and compiling Python code to faster C/C++ or machine code gives huge performance gain. Speed up increases with increase in number crunching. It is seen that Cython saturates to a speed up of around 150, when Numba continues to provide higher performance. For application with heavy number crunching, Numba provides speed of C/C++ with features of Python. In one of our benchmark case, Numba improved Python performance by over 13 Million times which too large to ignore.

1 thought on “Speed up Python up to 1 Million times: Cython vs Numba”